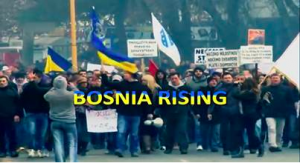 Dissent Project’s documentary ‘Bosnia Rising’ centres on Bosnia’s current social and economic crisis. The film sheds light on a situation affecting not only the population of Bosnia but also much of the planet.

We are proud that the Robert Schalkenbach Foundation supported this project as their  vision of a world of liberty and equality; of opportunity arising from economic, social and environmental justice links closely to the message of ‘Bosnia Rising’.

We decided to hold our first screening of ‘Bosnia Rising in  Bosnia’s capital of Sarajevo. Here is Reuters coverage of the night:

British actress and activist Vanessa Redgrave premiered a documentary late on Friday made with her son about a workers’ uprising in Bosnia this year that typifies the pain of post-communist transition in eastern Europe.

“Bosnia Rising” centers on the fight to save a detergent factory in the northern Bosnian town of Tuzla, once a hub for the metals and chemicals industries of former Yugoslavia but now home to one in five of Bosnia’s 27.5 percent registered unemployed.

The Dita factory, which before the Bosnian 1992-95 war made detergents used in households up and down the former socialist Yugoslavia, today stands idle after a failed privatization by a local tycoon. The plant is guarded around the clock by its workers who fear the owner might sell off the machinery.

The 77-year-old Redgrave, an Academy Award winner known as an advocate for the rights of workers, said the film, which she co-produced, shed light on a situation affecting not only Bosnia but much of the planet.

“It is an example of workers who suffered through privatizations that have wrecked and destroyed the economy, the European one,” Redgrave told reporters in Sarajevo.

Almost as well-known for her left-wing activism as for her acting accolades, Redgrave stood for parliament as a candidate for the Workers Revolutionary Party in the 1970s and launched the Peace and Progress Party to promote human rights in 2004.

The protest by Dita workers in February ignited the worst civil unrest in Bosnia since the war, driven by simmering anger over unemployment and the shortcomings of an unwieldy system of ethnic power-sharing that has kept the peace since 1995. Rioters set fire to government buildings in several cities.

“Social justice is something people everywhere are crying for and rallying for it, organizing for it, and are determined to restore social justice,” Redgrave said. She also pledged to raise funds and engage a team of lawyers to help Dita workers.

Redgrave’s son, Carlo Nero, who directed the film, said the project tries “to inspire questions and provoke a thought process”.

“We hope it goes beyond this screening… but that dialogue can open up with activists involved in recent protests, with all layers … of society, regardless of who they are and where they come from,” said Nero.

Anger is high over the perceived corruption and aloofness of elected leaders in the country of 3.8 million people, which will hold presidential and parliamentary elections on Oct. 12.